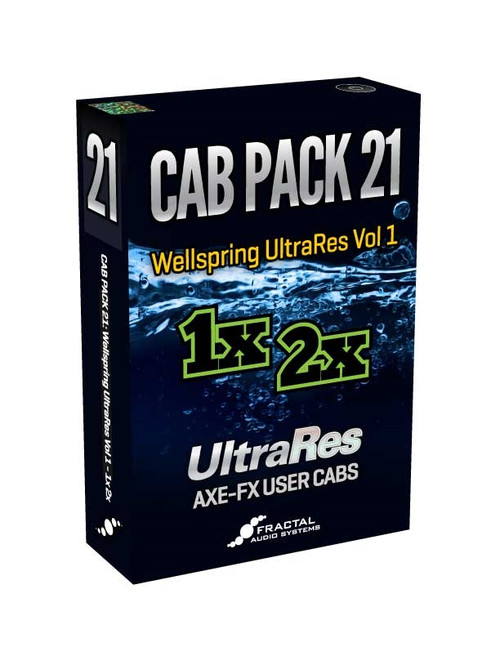 NOTE! Cab Packs require an Axe-Fx III, Axe-Fx II, AX8, or the Cab-Lab 3 plugin. This pack is not compatible with Axe-Fx Ultra or Standard. There are NO RETURNS/REFUNDS on Cab Packs.

Add new sounds to your Axe-Fx II or AX8 with UltraRes User Cabs.

Cab Pack 21: Wellspring UltraRes Collection Vol. 1 returns to the thrilling days of our first-ever Cab Pack, produced at Wellspring Sound Studio in 2013 before the advent of UltraRes. This all-new pack contains 257 stunning UltraRes User Cab IRs featuring selections from the impressive collection of amps at Wellspring Sound Studio, specifically those with 1x8, 1x10, 1x12, 1x15 and 2x12 speaker configurations.
User Cabs may be easily uploaded to your Fractal Audio Systems products using Fractal-Bot, Axe-Edit, or Cab-Lab. This pack also includes the high resolution .IR files required to create your own original multi-mic UltraRes mixes in Cab-Lab. (Please remember that it is illegal to publicly or privately share Cab Mixes containing these or any commercial IRs.)

All captures were done using a Neve 1073 preamp.

Different mics were used on each cab, positioned in a variety of locations, listening and measuring to find "sweet spots." For some of the captures, the baffles or gobos were removed, resulting in a slightly roomier sound. These captures are indicated with RM.

This Cab Pack was engineered by Eric Killburn of Wellspring Sound Studio.