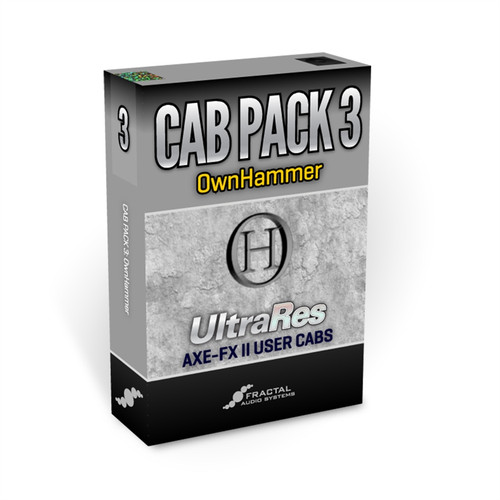 NOTE! Cab Packs require an Axe-Fx III, FM9, FM3, Axe-Fx II, AX8, or the Cab-Lab 3 plugin. This pack is not compatible with Axe-Fx Ultra or Standard. There are NO RETURNS/REFUNDS on Cab Packs.

The OwnHammer Studio Mix UltraRes collection includes every IR in the OwnHammer Studio Mix Libraries (as of Feb 7, 2014). They have been re-created in the new UltraRes format based on original full-resolution captures. These IRs represent some of the most popular and well-received 3rd party IRs in the history of the Axe-Fx and we are proud to offer them in this highly anticipated new format. Visit www.ownhammer.com for more details and additional IR offerings, and watch for more joint productions between Fractal Audio Systems and OwnHammer in the future.

Every cab is captured with multiple speakers.

The 4x12 includes the following:

"Mic Mixes" are also provided for every speaker: