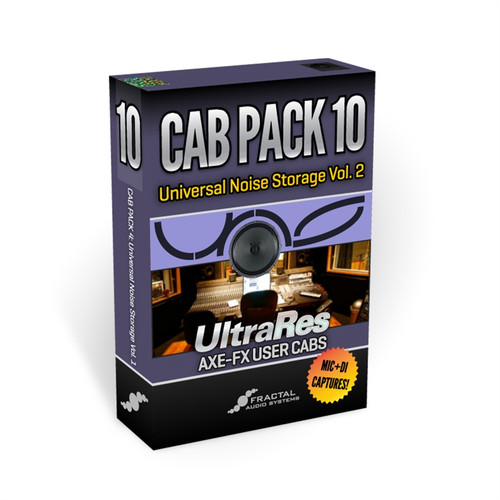 NOTE! Cab Packs require an Axe-Fx III, FM9, FM3, Axe-Fx II, AX8, or the Cab-Lab 3 plugin. This pack is not compatible with Axe-Fx Ultra or Standard. There are NO RETURNS/REFUNDS on Cab Packs

Cab Pack 10: Universal Noise Storage Vol. 2 UltraRes Collection contains 214 User Cab IRs by Fractal Audio Systems and Tom Eaton of Universal Noise Storage Studio.
It includes sixteen speakers, each captured with multiple individual microphones placed on carefully selected sweet
spots. In response to customer requests, weve also included IRs of the back of open-back cabs. These IRs are
compatible with every Axe-Fx II or AX8 version, and for use with Cab-Lab 3.
Cab Pack 10 was captured using the new MIC + DI method, which completely factors out the influence of the power
amp used during capture. The resulting IRs therefore more accurately recreate the sound of the actual speaker. (Even a
solid state amplifier has a finite output impedance [non-infinite damping factor] which can result in several dB of
deviation from flat response due to the extremely reactive load a guitar cab presents.)

MICROPHONES (not every mic was used on every cab)

We used multiple individual microphones on each speaker cab, starting in a classic position near the edge of the dust cap and then finding various sweet spots. Variations in this pack are indicated simply with letters A, B, C, etc., except for BACK (the other side of the cab) and REV (the other side of the mic).

Manufacturer and product names mentioned above are trademarks or registered trademarks of their respective owners, which are in no way associated or affiliated with Fractal Audio Systems. The names are used only to indicate sonic and performance characteristics.