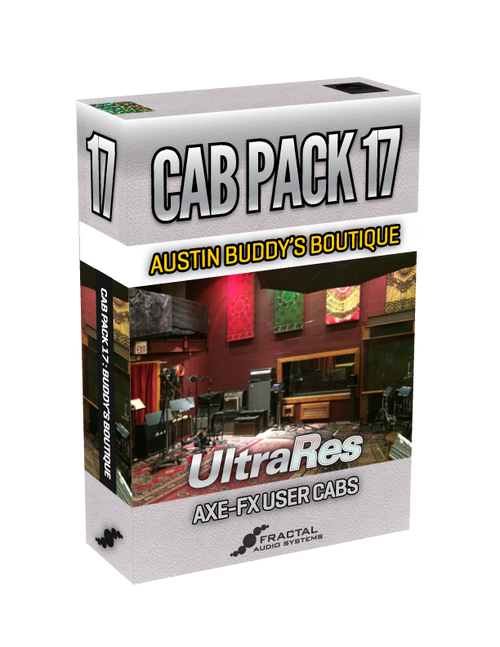 NOTE! Cab Packs require an Axe-Fx III, FM9, FM3, Axe-Fx II, AX8, or the Cab-Lab 3 plugin. This pack is not compatible with Axe-Fx Ultra or Standard. There are NO RETURNS/REFUNDS on Cab Packs.

Add new sounds to your Axe-Fx II or AX8 with UltraRes User Cabs.

This Cab Pack is compatible with every Axe-Fx II or AX8 and can be uploaded using Fractal-Bot or Axe-Edit. This pack also includes the .IR files for use in CabLab 3 where you can create your own original mixes or simulate the sound of a mic'd speaker cab with or without an Axe-Fx.

Reminder: It is illegal to share mixes containing these or any commercial IRs.

UltraRes enhances the spectral resolution of an IR without extreme CPU burden or intolerable latency. It requires an Axe-Fx II or newer running firmware 13 or newer or AX8. Our Mic+DI technique factors out the effect of the power amp used during capture for an IR which more accurately represents the sonic characteristics of the speaker itself.

Not every mic was used on each cab.

All captures were done through an API preamp except those indicated N which are through a Neve.